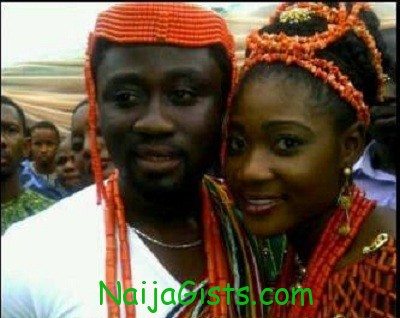 This story is very hilarious in nature. According to the latest issue of Yes Magazine Nigeria, Nollywood Actress Mercy Johnson’ Husband Prince Odianosen’s been accused of monitoring her every move after their glamorous wedding in August, 2011.

The City Tracks scoop has uncovered a rather bizarre past time of Prince Okojie, the hubby of Nollywood actress, Mercy Johnson Okojie, especially each time his role interpreter wife goes on movie location.
Each day of the week, he visits all the newsstands in their Omole estate, in Ikeja abode and its environs in search of news magazines with stories about his wife. Our sources revealed that almost all the vendors in the area have been detailed to keep him posted anytime a magazine carries a story on Mercy. naijagists.com

The source added that at the rate the man carries out his assignment, it is difficult to say whether he has any other job he does as diligent as this.

While a school of thought believes his latest antics is to prove his love for his wife, others believe he might just be sniffing around.

To support their claim, the latter believe he does not have to read stories about his wife on the pages of magazines to kill boredom each time she hops off to movie location. Talking to her on the phone is more than adequate, they argue.

Don’t take this story seriously. Let’s have a good laugh about it. Have a great day guys !