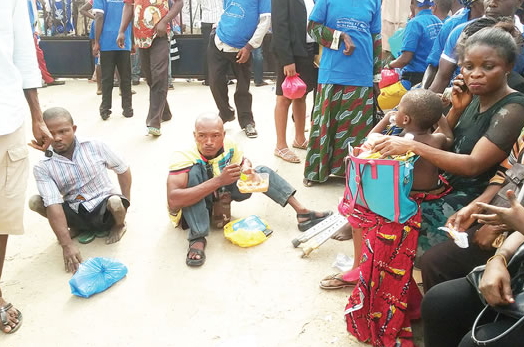 Several physically challenged individuals who came for an empowerment programme, sponsored by the Akwa Ibom State Government through the Ministry of Women Affairs and Social Welfare, sustained varying degrees of injuries in their bid to escape from the Nigerian Security and Civil Defence Corps operatives who flogged them during the distribution of food and money.

It was learnt that some of the victims who were visually impaired, fell on rough surfaces, while others, who could not run, were marched on by other fleeing persons.

Some were also said to have passed out in the melee.

A victim, Ime Okon, from Ikot Ntu, in the Itu Local Government Area of Akwa Ibom State, told our correspondent on Thursday that he could not raise his left arm as it had been broken following the stampede that ensued after the flogging by the NSCDC men.

He said, “As we were trying to come out, the NSCDC personnel started flogging people. The fleeing crowd pushed some of us down and stepped on us to escape. I can’t raise my left arm. I don’t have money to go to a hospital. I know three others who sustained serious injuries.”

A police officer at the scene told our correspondent that nobody died during the incident, adding that only a few persons sustained injuries as they tried to make their ways, into where food and money were being distributed.