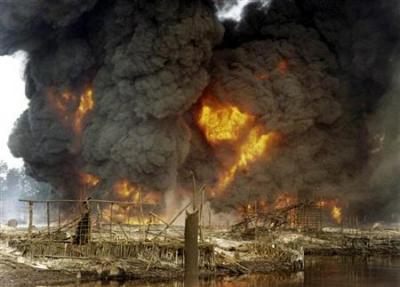 The fire on the pipeline in Ikarama, Bayelsa State, started a day after the company received reports of an oil spill there and was still raging at 1.45 (1245 GMT), spokesman Precious Okolobo said.

“SPDC (Shell Petroleum Development Corporate) confirmed reports of a fire incident this morning on the Okordia/Rumuekpe line … and mobilised a fire-fighting team to the site.”

“Some production has been shut down … “We can’t give detailed figures on that,” he added. “A joint investigation visit planned for tomorrow will determine the cause and impact of the fire.”

Nigeria’s oil output in the Niger Delta region is often disrupted by sabotage attacks on facilities and by bunkering — the tapping of pipelines to steal oil.

Nigeria’s high-quality oil is widely exported to the United States, Asia and Europe, and disruptions to supplies can affect world prices because it is priced against the Brent oil benchmark. (Reuters)