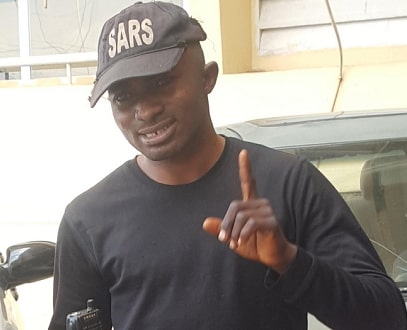 According to police, the suspect who is a taxi driver operates within Mararaba, Area 1 axis of the FCT where he extorts money from victims.

The Deputy Commissioner in charge of Criminal Intelligence and Investigation Department, DCP Salisu Gyadi-Gyadi said he was arrested after the police got a tip off from some of those he had defrauded.

“The Anti-One Chance Squad on the 11th September 2018 at about 1500hrs acting on a tip off arrested one Tijani Omeka a taxi driver who parades himself as an operative of the Special Anti-Robbery Squad (SARS).

“The suspect who often poses as Corporal Tijani to defraud unsuspecting members of the public was arrested at Nyanya, Gwagwalape Phase 1 after a sting operation.

“We recovered from him one black faz cap with the inscription SARS and a walkie-talkie.”

On his part, Omeka said:

“I found the walkie-talkie from SARS premises on the floor and the cap belongs to one of the Operatives.

“The policemen are my friends and they usually use my service whenever they go on operation because I’m a taxi driver.

“I travelled and the cap was with me for about three months because I was out of Abuja. I took my car for repairs with the intention of going to drop the cap and walkie-talkie after they fix my car but I was still at the mechanic when they arrested me.”

On how they were arrested, The Deputy Commissioner of Police said: “As part of the renewed commitment by the Command to rid FCT of the activities of one chance robbers, the Command newly created Anti One Chance Squad which is headed by a Chief Superintendent of Police.

“They smashed three notorious one chance robbery gangs and recovered their operational vehicles.

“The suspects were arrested on 6th and 7th September, 2018 at Akaraka Gosa and Nyanya axis. The exhibits recovered from them includes, one ash coloured Ford car with reg. no. EL 461 LSD, one blue Golf with reg. no. KUJ 367 TV, one Nissan Almera and some well-trimmed papers.

“My work is not one chance work, it is open and close business and all we do is to pick pockets. Those who do one chance use weapons but I don’t use.

“We usually carry unsuspecting passengers and we use the lady amongst us just to convince our would be victims that we are genuine.”