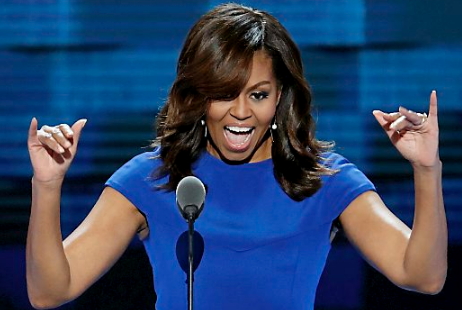 “The hateful language… from public figures on TV does not represent the true spirit of this country,”. “Don’t stoop to their level. Our motto is, when they go low, we go high.” – she said, to loud cheers and applause

Mrs Obama’s speech was widely seen as an attack on Mr Trump, although she did not mention the Republican nominee by name.

She said she wanted her husband to be succeeded by “somebody who knows this job and takes it seriously” and that could only be Mrs Clinton.

“When someone is cruel or acts like a bully, you don’t stoop to their level. We urge them [our daughters] to ignore those who question their father’s citizenship or faith. Don’t let anyone ever tell you that this country isn’t great. Issues facing a president cannot be boiled down to 140 characters. Ideal president can’t have a thin skin or a tendency to lash out.”

Because of the Democrats’ candidate, she said, “my daughters and all our sons and daughters now take for granted that a woman can be president of the United States.”

In other remarks, she praised Mrs Clinton as a “true public servant” who had shown “devotion to our nation’s children” and “never buckles under pressure”.

“Incredible speech by an incredible woman. Couldn’t be more proud & our country has been blessed to have her as FLOTUS [first lady of the United States]. I love you, Michelle.”

Watch the full speech below