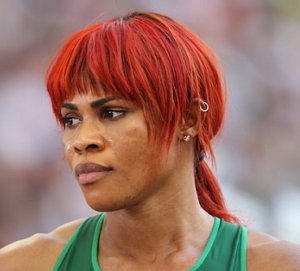 It has been revealed how Team Nigeria captain, Blessing Okagbare, fought hard to defend her teammates leading to her been accused of disrupting the camp.

Our correspondent scooped that the plan was to pay only the foreign-based athlete’s competition grant but the African record holder in 200m said no, leading to the athletes calling the Technical Director, Sunday Adeleye, for a meeting.

According to our source, Adeleye promised to meet with the minister of sports, Solomon Dalung, to present their case while the athletes agreed to nominate two representatives to go with the TD. He however asked them to go alone first and meet the minister.

“We were told that the training grant is for foreign basee athletes, so blessing said no, it is never done,” our source who crave anonymity said.

“She fought for the home-based athletes and afterwards we had a meeting and agreed that we are going to invite the minister and president of the AFN (Athletic Federation of Nigeria), Ibrahim Gusau for a meeting.

“We called Fela (Sunday Adeleye) in during the meeting and he came with the secretary. We told them that if the issue of the training grant is not settled nobody is going to compete.

“They got there and did not present the things we discussed at the meeting, they betrayed Blessing and the meeting was sabotaged. All what we started hearing was that Blessing was instigating athletes not to run.

“It was so unfortunate because at the end, the athletes she was fighting for turned around to betray her because they were promised money which they received.”