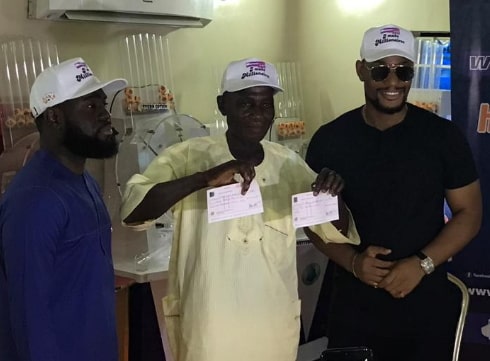 The man who cannot speak or write English, said he learnt of Western Lotto through one of its agents in Abeokuta. He said though he had been playing pools in the past, his experience with Western Lotto was outstanding.

Speaking in Lagos at the presentation of the N18 million cheque to Adebiyi, 66, Western Lotto Nigeria Limited Managing Director, Yomi Ogunfowora said the payment of the winning was a fulfilment of the firm’s promise of prompt payment of winnings.

“This is a practical demonstration of our promise to pay winnings as soon as they come. We are committed to making millionaires by redistributing wealth. For us, our word is our bond. And we congratulate Mr. Samuel Adebiyi, on winning N18 million from our 5/90 Ghana game.

“We do hope that from today, Adebiyi will go all out like Miss Dorcas Nwagbara, who won N15 million for playing one of our other games, to tell others about Western Lotto. We pay as soon as you win. No stories!” Ogunfowora said.

Speaking in Yoruba, an obviously elated Adebiyi said he had been down with malaria for some days, but became well immediately he learnt that he had won the lottery.

Adebiyi said he felt he was dreaming until he got to the Victoria Island, Lagos office of Western Lotto and was presented his cheque.

On his plans for the money, Adebiyi, who has two wives, but refused to disclose the number of his children, said he had not decided what to do with the money.