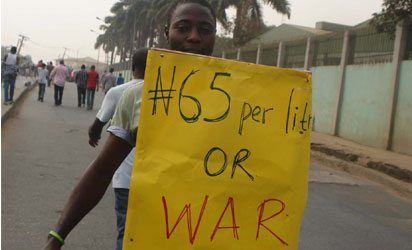 The leadership of Nigeria Labor Congress has ordered President Goodluck Jonathan to revert petrol price to N65/litre or face another round of showdown (On-Your-Own). naijagists.com

President Jonathan has said the implementation of the palliative measures proposed to cushion the effect of the removal was no longer feasible because it was based on 100% removal of subsidy on local consumption of fuel.

“This Subsidy Removal Programme (un-SURE) is developed with the expectation that we were going to completely deregulate the Downstream sector of the oil industry, the 100 per cent removal of subsidy… we will still come up with a document based on what we get,” he said while addressing chieftains of PDP during their NEC meeting in Abuja on Monday.

Backing his decision, the Leader of the Senate, Victor Ndoma-Egba said; “The President said he wanted to remove subsidy, Nigerians said they don’t want it removed. Now that he was not able to realize his plan, where will he get the money to carry out that policy?

The President will have to look at the proceeds from partial deregulation and work with what is saved. That is the reason why the document earlier produced should be revised to reflect the current realities.”

Should any serious minded person take NLC serious again? They had the opportunity to make him revert the price in the first place, and they bungled it. Now they want to call workers out on strike again after those untold hardships and untimely deaths, they must be kidding. (punch)