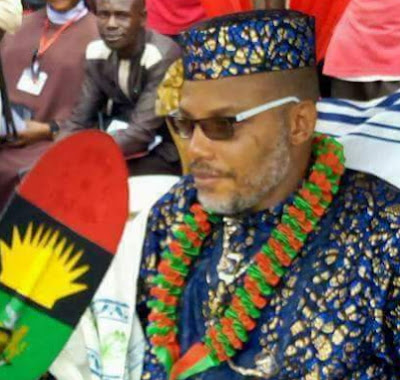 So there is a Nwannekaenyi ‘Nnamdi’ Kenny Okwu , who is simply known and addressed as Mazi Nnamdi Kanu?

The fiery young man of Afara-uku, a London returnee who is the leader of the proscribed Indigenous People of Biafra (IPOB) has gone underground since the military’s Operation Python Dance II grounded his group of cudgel-wielding and stone hurling youths in whose hearts he had ignited a huge fire of revolution.

He promised a new country, Biafra, an Eldorado that will offer the teeming army of suffering youths new opportunities to realise their dreams. The shepherd has fled and the sheep are in disarray. What a pity.

Kanu was deified by many. They kissed his feet and ascribed to him some ethereal powers. He talked tough and loud. His rhetoric was venomous and acerbic. He poured out insults as if he was engaged in a motor park brawl. His supporters goaded him on. He was their Pied Piper to whom they flocked like bees to honey. Old men, who should have cautioned him to pull the brakes, muffled their voices of wisdom. They had found in him a messiah. He was their Moses who would lead the march to the promised land of Biafra. 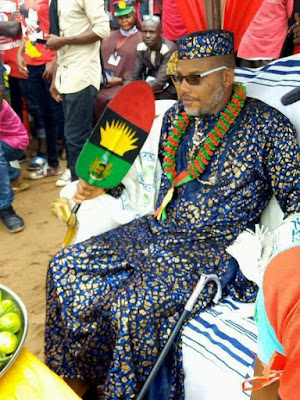 Alas, it was all a castle in the air. Fantasy. Dreams. Illusion with perhaps a tinge of hallucination. A young man who loves life like any other of his age, romantic (photographed on a London street planting a kiss on a woman’s face), educated and enlightened with prospects of a great future dumping it all for a secessionist tendency. What sense do we make of this? Ambition? Chivalry?

You never get it wrong in a barber shop. There will always be answers to seemingly knotty questions. Besides, the air of freedom, the conviviality and the sheer camaraderie are unmistakable. And so to the place I headed yesterday.

As usual, it was throbbing with people – ordinary folks with no airs, self-acclaimed experts and emergency analysts.

From a loudspeaker planted on one side of the door, a hip hop artiste was dishing out some danceable stuff with esoteric lyrics. Some youths watched as two men slugged it out on the draught board. Others just sat down, sharing jokes and laughing like guests at a comedy show. Some were holding cans of a popular energy drink. Others clutched bottles of beer, which they held tightly as if they were some prizes given out after a race.

On the wall is a big portrait of the late Jamaican songster, Robert Nesta Marley, a big roll of weed in his mouth, which was belching out thick white smoke. Under the picture is inscribed “thank you for not smoking”.

A commercial motorcycle, popularly called okada, rumbled its way to the frontage of the shop and stopped suddenly. An old man with a big bag slung on his ageing shoulder walked in, dragging his feet and flashing some teeth that could obviously do with some brushing.

“Papi D is here o,” a young man called out.. It was an announcement fit for the royalty. All heads turned in the direction of the new guest. The barber, who had been immersed in his work like a painter doing some murals, turned and smiled. He shook his balding head and went back to work.

The man dumped his bag on the cluttered floor and headed for the bathroom. He returned and raised his two hands in salutation like a politician paying obeisance to his constituents. A young man yielded his seat to him. He sank in and the seat creaked.

A fellow with a loose tie and a pair of glasses, said to be a banker, set the ball rolling. He unleashed a torrent of questions.

“Welcome sir. What is all the noise about Kanu? Has the government handled the matter with tact? Are we breeding another Mohammed Yusuf scenario that bred Boko Haram? Do we really need to kick his ass? Where are the elders?”

The old man smiled. “You see, the first question to ask is, are the actions of Kalu and his cohort of excited youths legal? I will answer that. Yes and no. Yes; they are entitled to their freedom of speech and association. No; there is no freedom that is limitless. It all ends when it becomes a threat to the corporate existence of the nation and a pain in the neck for others. The young man’s belligerency was getting worrisome.

“Can there be tact without facts? Should the government have smashed the group? Again, yes and no. Since the Kanu matter was in court, the way to go was to return to court and sort it out. Yes; if it is true that his boys hurled missiles at soldiers who were getting set for the new dance craze, the dance of pythons. Soldiers will always kill a fly with a sledge hammer, you know.”

“As for the elders, I think they either tacitly sanctioned Kanu’s excesses or were just indifferent, believing that ‘a young man who would not heed the warning to stay away from leprosy should be ready to live alone in the forest’. The governors didn’t move fast and other politicians were obviously positioning themselves to profit from the delicate matter. Now the chicken has come home to roost.”

“Sir, Papi D. But, there were respectable people who either showed solidarity with Kanu or persuaded him to embrace peace and give Nigeria’s unity a chance.”

The old man covered his mouth as if he was going to cough. His eyes creased in a sudden burst of some strange emotion. He reached out for his bag and pulled out a sachet of a white liquid, which he tore open with his teeth. He gulped it down all at once and the smell of gin perfused the place.

“I’m sorry, gentlemen for that short break in transmission. My spirit tells me I should be in high spirits as we seem to be approaching the spiritual angle to this matter. You see, it wasn’t for lack of eminent people that Kanu had to cross the line. Being eminent does not confer wisdom on you. I recall that a governor once dressed up like an Igbo gentleman – a long dress decked with glittering buttons, red cap and all that – and went to the hearing of Kanu’s case to encourage him. He even declared that his state was part of the Biafra Kanu dreamt of. How is this fellow different from those exuberant boys who kissed Kanu’s feet?”

“Thank you, Papi D. Is it right to call IPOB a terrorist organisation?”

“You see, the government pressed the panic button too early. Two wrongs a right do not make. That is that. Activism should be distinctly differentiated from terrorism, but it is convenient to call a dog a bad name in order to hang it. The government said IPOB had its secret service, Kanu was inspecting guards of honour mounted by his Biafra National Guard and the group was extorting money at checkpoints.

“Looking back, isn’t the young man lucky? When Fela – of exciting memories – proclaimed his Kalakuta Republic – pulsating Afrobeat music, scantily dressed women, ganja, gin and all that – soldiers stormed the place and burnt it down. His aged mum was thrown down from the balcony. She died of the trauma.

“Besides, isn’t the civil war enough a lesson for us?”

“Kanu? Look young man, that question is not for me. Ask Senator Enyinnaya Abaribe and the Jewish high chief priest, Immanuu El-Shalum who took his bail. I am sure they can produce him.

“I also asked that question when somebody was saying he may have disappeared for some spiritual hibernation to mitigate the traumatic effect of the military assault he suffered. The fellow was suggesting that the Kanu family should hire the musician – activist and architect of the “Our-mumu-don-do” protests to stage a million-man march for Kanu. The aim will be to unravel the mystery of Kanu’s sudden disappearance.”

“Hmm, Papi D. What is the way out of all this and other related matters, including the marginalisation of the Igbo.”

“Marginal-what? You see, I was delivering a speech at the palace the other day and one learned fellow raised this matter. My take is that the Igbo man is too resourceful – connected, educated, rich in cash and intellect, and talented – to be marginalised. He will find fulfillment in a restructured Nigeria. Secession is extremism. It won’t help.

“I recall a joke that once made my day:

“An Edo man invited his friends for his mother’s burial. After lowering the coffin, the family placed a piece of yam, rice, meat etc in the grave– in line with tradition.

“Why, a Hausa man asked?

“The Edo man smiled and said, according to our tradition, the dead go on a long journey and need all the food items they can get.

“The Igbo man smiled, brought out his cheque book and wrote a cheque of N200,000, dropped it in the coffin and took the N150,000 as change. He then said, ‘Nwanne, withdraw when you reach dia o…It is going to be a dangerous journey; we don’t know how many robbers are out there and, after all, we are in a cashless economy na! Travel well o!”

“Tell me, can anyone ever marginalise a people like that?” Papi D said with a mischievous grin.

Continue Reading
You may also like...
Related Topics:flee, kanu, nnamdi

Photos: Late Obafemi Awolowo’s Statue Of Honour Unveiled In Ikeja Lagos
Fayose Is Not Contesting In 2019, He Is A Political Agbero Destroying PDP- Kashamu