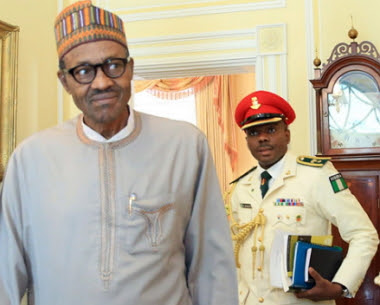 Since May 2015, Lt. Colonel Mohammed Lawal Abubakar has held one of the toughest assignments his career could ever offer him. He was appointed the Aide-de-Camp (ADC) to the President of the Federal Republic of Nigeria, President Muhammadu Buhari.

With the appointment, Abubakar is to protect and be ready at all times to lay his life for the President. 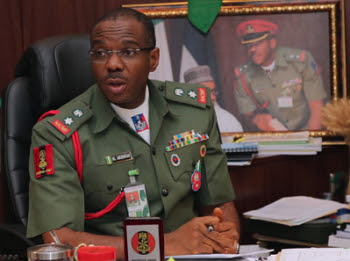 Abubakar has not handled his job with kid gloves. He approaches every public function and other assignments both within and outside the country with the highest level of precision and seriousness they deserve. 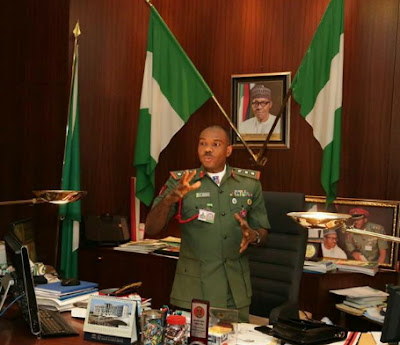 He keeps an eagle’s eye on his principal, watching over every move he makes. He leaves no stone unturned to ensure the safety of Mr. President at all times.

His job goes beyond just standing behind the President at official functions and ensuring that his principal was okay at the function.

First and foremost, his role as a military officer and ADC to the President is mostly ceremonial and to give the Presidency dignity and honour.

He usually follows the President whenever he goes out on official duties. 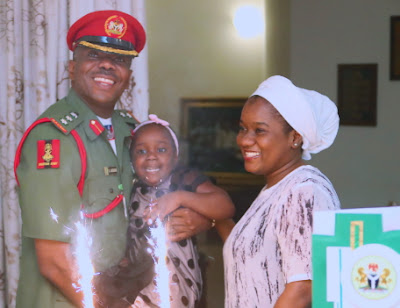 He is supposed to escort the President out of the Presidential Villa into a waiting car, opening the door, then standing at attention and saluting when the President sits on the back seat.

He then closes the door and occupies the front passenger seat.

Abubakar, at times, carries the President’s personal items like mobile phones and speeches.

He also receives gifts or other items on behalf of the President.

Like a queen protecting the king in a game of chess, Abubakar has perfectly deployed the bishops, knights, castles and pawns, the human resources under his control, to protect Mr. President. 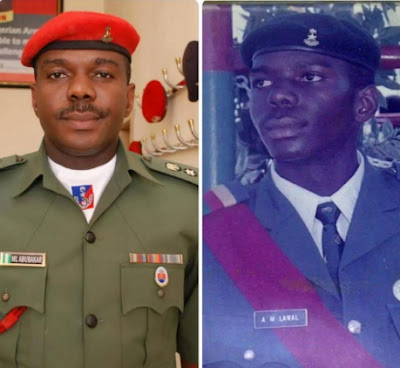 Many soldiers of his rank, no doubt, were as qualified to be the ADC to President Buhari in 2015, but other qualities stood him out among the pack.

Abubakar, who was born on the 28th of March 1973 at Wusasa Zaria, Kaduna State, attended the Nigerian Military School (NMS) Zaria from 1985 to 1990 where he was said to have developed early leadership skills.

Just like his principal, President Buhari, Colonel Abubakar was also the Head Boy of his set, where he was nicknamed ‘Boy Regimental Sergeant Major’.

After graduating from NMS in 1990, he had a stilt stay at Ahmadu Bello University, Zaria as a science undergraduate student.

Abubakar, who later proceeded to the Nigerian Defence Academy (NDA) in 1992 on gaining admission as a member of 44 Regular Course to read Biological Sciences, is a tested and experienced commander, trained and discipline instructor, security manager and a talented investigator.

Abubakar’s qualifications include Bachelor of Science Degree in Biological Sciences from the Nigerian Defence Academy, Masters in Law Enforcement and Criminal Justice and Masters in International Affairs & Diplomacy (MIAD) both from Ahmadu Bello University, Zaria.

In his career, Colonel Abubakar, so far, has travelled to over 40 countries globally and is married to Hajiya Fatima Musa and blessed with a daughter, Aisha Nawal.

Before his current assignment, Colonel Abubakar had also served in various Army units and formations within and outside Nigeria at different capacities.

Others include Nigerian Army School of Military Police Basawa Zaria for 4 years as an Instructor and Staff Officer Grade 2 training and operations, Nigerian Defence Academy Provost Kaduna as Commander NDA Provost and an Instructor, then Seven (7) Division Provost Group Maiduguri as the pioneer Acting Provost Commander.

He was the first Camp Commandant to host/receive the International Committee of the Red Cross and Crescent to the detention facility in January 2014.

He also served at the Nigerian Army Training Centre Kontagora as Staff Officer Grade One Operations and Training.

The ADC also coordinated the training of 143 Battalion on Counter-Terrorism and Counter-Insurgency with the United States Rangers and the British Military Advisory Training Teams respectively.

Abubakar, who turned 45 years old last week Wednesday, had no choice but to continue to perform his duties on that his special day.

He was standing solidly behind the President when the Federal Executive Council (FEC) meeting started at the Presidential Villa that Wednesday.

Abubakar took part in the engagements of the President that Wednesday before retiring to his residence to mark the day with his family.