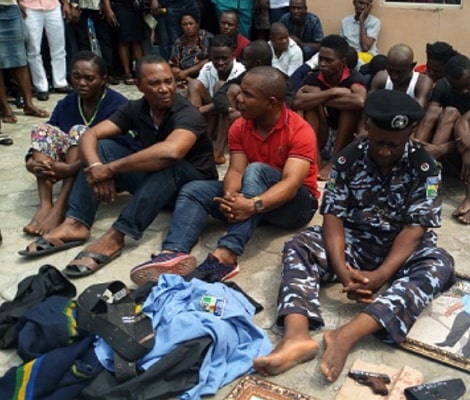 The Akwa Ibom state police command has paraded a fake police officer of the rank of assistant commissioner of police ACP) and 213 other suspects for various crimes.

The state police commissioner, Musa Kimo who paraded the suspects before journalists on Thursday at the command’s headquarters, Ikot Akpan Abia, listed their crimes as murder, Kidnapping, child stealing, defilement, stealing, armed Robbery among others.

Kimo later in a press briefing said the fake police officer identified as Kingsley Udoyen of No.3 stadium road, in Abak council area of the state, had defrauded and threatened unsuspecting members of the public.

The CP mentioned that one English pistol without magazine and ammunition, portraits of chief superintendent of police and Assistant Commissioner of police, three pairs of uniform, police belt, fake police identity cards as well as other documents were recovered from the suspect.

When interrogated by journalists, the fake police officer said,”It started when I lost my job. I was with the police in Alagbon as a superintendent of police. I was dismissed in 2007 because of the illegal job I went for. I left Lagos in 2008 and went to Calabar where I met Glory Etim, my girlfriend.

“She is the one who bought all these police uniforms for me, she is a serving officer and works with the Police Secondary School.

I am a car dealer and I go to Cotonou. Since I was dismissed, I don’t have a job. I am 56 years old from Mbiaobong Ikot Etefia in Ikono and I am married with four children. I know what I am doing is against the law”, he lamented.

The Commissioner of police further disclosed that one Joseph Effiong from Ikono local government area who worked as a security man at Royal City Central Chapel, Uyo was arrested for allegedly luring one little Miss Mfoniso Nse Okon to an uncompleted building and defiled her.

He said another suspect one Joseph Sunday Essien was apprehended by his men for defiling his 13-year-old stepdaughter, Miss Patience Eden.

He said that eight other cultists who were confirmed members of Iceland confraternity have been arrested for armed robbery.

The commissioner of police warned the people to desist from crime as the 2019 general election was fast approaching.