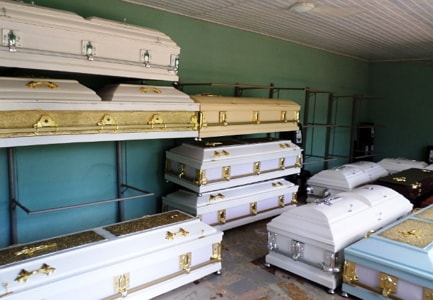 Agwa Road, a sprawling suburb in Ogbaku, Mbaitoli Council Area of Imo State, plays host to one of the numerous private mortuaries and embalment Centres that dot Imo State communities.

The eerie atmosphere that pervades the area helps to heighten the fears of residents and visitors who throng the area.

Another feature of Agwa Road is the putrid odour that fans the grim faces of residents and visitors alike as they approach the aging bungalow that houses hundreds of bodies that have been pumped full with embalment chemicals by untrained morticians. Fear of ghosts that creep in the dark also adds to the travail of residents who retire to bed earlier than they wished, coupled with ‘imagined voices’ that drive cold into the heart of even the bravest.

Like in other businesses, the Udokamma Embalmment Centre, which sits conspicuously along the Agwa road, equally attracts other value chains.

Opposite the morgue and other adjoining streets, coffin makers, ambulance operators and various undertakers struggle to market their products, converting the area into a one-stop shop for ‘the dead’.

The case of Agwa is similar to very many other communities in the state, where the business of private morgues thrives.

The embalment centres have continued to boom, despite the attendant health and social challenges.

Like every smart investor, operators of the private morgue, equally consider location in siting their business as some of the biggest private mortuaries are sited along accident prone roads.

For instance, Njaba Bridge, which is one of the most dangerous stretch in the state, is home to several private morgues.

Weird world of the untrained morticians

Nwolisa Kingsley, a 27- year self-acclaimed mortician, can pass like every other young man of his age, but his steel looks enhanced by two burning eyeballs betrayed a ruthless spirit that is trapped in the diminutive frame.

Speaking reluctantly with The Nation, in his dingy office directly opposite the morgue where hundreds of naked, black looking and bloated corpses lay on top each other in a most disorderly manner, Kingsley said he enjoyed his job looking after the bodies that he strangely referred to as ‘these things’.

Contrary to the opinion that the spirits haunt workers in the morgue, especially those who died in accidents or other tragic means, the mortician described the bodies as the best neighbours one could have.

“These things are not troublesome, they obey instructions without questioning unlike human beings but we treat them with respect knowing that there are people that love them too. There are some that we give VIP treatment that is if the owners cooperate.

”I am not scared of stories about ghosts because once your hands are clean, you have nothing to fear about; after all, I am not responsible for their death. But the only problem is the way people discriminate against you because you are working in a mortuary, they don’t want to come close to you. Some people even think that you are not normal.

”I did not go to any school to learn to be a mortician. It was one of my friends, Ini, he is from Akwa Ibom who taught me the job. He was working in a mortuary in a private hospital in Owerri and I used to go and visit him. At first I could not sleep at night after seeing the bodies, especially some accident victims that were brought in bits and pieces in body bags but with time I overcame that fear.”

How lucrative is morgue business

Operators of private morgues sure smile to the banks as they make between N200,000 and N300,000 monthly, after initial expenditures and payment of staff salaries.

At one of the morgues visited by our reporter, the last tally given out read 128, meaning that 128 bodies were cramped into the two-room apartment, awaiting to be claimed.

Apart from the compulsory N5,000 non-refundable deposit, N300 is charged for daily maintenance of bodies plus N20,000 for the collection of a body.

According to a supervisor in one of the private owned morgues, who preferred not to be mentioned because he was not authorised to speak on behalf of the owner, ”mortuary business is lucrative and there is no much competition like in other businesses. It is not capital intensive to set up”.

The supervisor disclosed that mortuary workers were poorly paid, adding: “The mortuary owners have a very strong union that is registered with the State Ministry of Health and they make it so difficult for new members to come”.

Efforts to get him to disclose the identity of his boss were rebuffed, apparently because the association of mortuary owners is run like a secret cult.

Threats posed by the private morgues

Aside from health and social hazards posed by the morgues, another disturbing aspect, is the inability of the mortuary workers to properly document the corpses.

There have been several cases of people claiming the wrong corpse, only to discover after it has been buried. This error of identity has caused severe crisis in most communities.

For instance, in Ndegwu, Owerri West Council Area, a famous family (name withheld), had the funeral of their patriach disrupted when a band of aggrieved mourners stormed the ceremony requesting that they hand over the body to them. After the initial uproar, it was discovered that the body they were about to bury was not their father. It took the intervention of the police to forestall bloodshed.

A medical practitioner and public safety analyst, Dr. Harold-Wilson Onumuo, stated that mortuaries should not be sited in neighbourhood where people live.

“Morgues should be cited in special areas because of the chemicals that are used by morticians to preserve those corpses.

“There should be well trained morticians to take care of the dead bodies because here we seem not to do autopsy and that is the major problem of citing morgues around residential areas because there should be known cause of death. Because when you don’t know the cause of death of an individual, you cannot preserve the body, because the preservation becomes a serious risk.

“And this scenario where every dead body is taken to the mortuary without ascertaining the actual cause of death, is a high risk factor, which is a part of treatment in the management of a patient, because even a dead body remains a patient, therefore it is imperative that you find out the primary cause of death before embalmment. It is only when you conduct an autopsy that you can find out if the cause of death is not transmittable. In most cases in the private morgues, this is not done and it very risky.

“There are supposed to be strict regulation of the mortuary business, especially in this era where there are many viral diseases that can cause death. For instance you cannot preserve a body that is killed by Ebola for instance. Our health sector here is poorly managed, because government officials give approval for the citing of these mortuaries.”

“People living close to the mortuaries stand a great risk, especially when they inhale the chemicals used for the embalment of the bodies. There should be guidelines in the establishment of morgues. Now there are chemicals used by morticians that are injurious to health and even viral diseases from the dead bodies could lead to outbreak of serious diseases.”