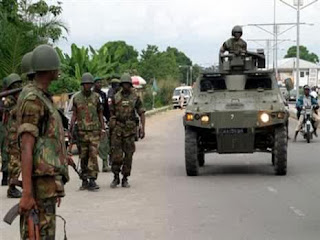 Boko Haram killed dozens of civilians and at least 11 soldiers when the militants took control of a Nigerian town and army base on the shores of Lake Chad at the weekend, a military source and witnesses told Reuters on Monday.

The Islamists attacked the northeastern town of Baga and the barracks on its outskirts on Saturday, potentially providing a launchpad for more attacks in Nigeria and neighbouring countries.

Lying at the end of a semi-desert road, Baga is the headquarters of a multinational force comprising troops from Niger, Nigeria, Chad and Cameroon, all of touch which Lake Chad, though only Nigerian troops are usually stationed in the town.

Troops fled the area after Boko Haram took over the base.

The group’s five year insurgency to establish an Islamic state has killed many thousands in Africa’s top economy and most populous nation. More than 10,000 died in the violence last year, the Council on Foreign Relations says.

Witnesses who escaped to the bush ran past the bodies of soldiers and civilians along the way.

“I was hiding on a tree top since that Saturday night until this morning at 3 a.m.,” Abubakar Usman, a Baga resident, told Reuters by telephone.

“Women in a nearby house brought us water and food … We snuck out and on our way, we saw lots of dead soldiers and 10 bodies of women.”

A military source said at least 11 soldiers had been killed along with a large number of civilians around the town, which was still in the militants’ hands on Monday. He said they set fire to houses and shot at residents as they tried to flee.

The military did not immediately respond to a request for official comment.

The growing brutality of Boko Haram, which began as a relatively peaceful clerical movement opposed to Western education, threatens Nigeria’s neighbours. At least 15 people were killed in an attack by suspected Boko Haram on a bus in northern Cameroon, officials said on Saturday.

“They are still there and many people (civilians) mostly women, children and aged one are still trapped in the town,” a man who works between the city of Maiduguri and Baga said.

Another witness, who gave his name only as Yusuf, said he tripped and fell as he tried to flee the town. When he got up, he saw about 20 bodies scattered along the ground where he was.

As well as killing, the militants have also kidnapped hundreds of mostly young people in the past year.