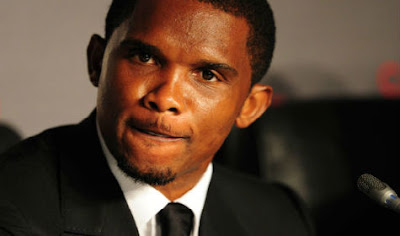 Cameron striker Samuel Eto’o has been accused by a Spanish prosecutor of conspiring to evade 3.5M Euros in taxes owned on income from his image rights when he was playing for Barcelona between 2006-2009.

The former Barca and Inter Milan player, now with Russian Premier League club Anzhi Makhachkala, is accused of four tax offences, each punishable with up to five years in prison and a fine of as much as 21 million euros.

The case presented by the prosecutor on June 15 at a Barcelona court, and which was seen by Reuters on Thursday, asks a judge to open proceedings against the player before the statute of limitations on one of the alleged offences expires on Saturday.

Spain recently launched a drive against tax evasion as it struggles to meet tough European deficit reduction targets that have meant budget cuts for hospitals and schools.

Eto’o allegedly created two companies, one in Hungary and another in Spain, and used them to channel income obtained from ceding his image rights to Barca and sportswear maker Puma, the prosecutor said. The Hungarian company paid one of the lowest corporate tax rates in Europe – 10 percent to 19 percent – while the Spanish company paid a reduced corporate tax rate of 30 percent to 35 percent, instead of the 45 percent income tax rate, the charge said.

Eto’o also allegedly used the Spanish company to deduct personal expenses, such as payments for his mortgages, furniture and expenses related to his luxury cars, the complaint added.

Eto’o and his club could not immediately be reached for comment. The prosecutor also accused Eto’o’s former agent, Jose Maria Mesalles, and the manager of the Spanish company, Manuel de Jesus Lastre, of the same tax offences.

Eto’o filed a lawsuit against Mesalles at a Barcelona court last year, accusing him of betraying his trust and of embezzling money, local media said.

Eto’o and his club are yet to respond to the allegations.(Reuters)