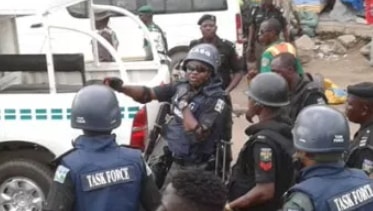 Borno state Police have arrested a 19-year-old tailor, Abba Umaru, over the murder of his 35-year-old pregnant sister, Ya’Amsa Umaru.

The state’s Commissioner of Police, Mr Damian Chukwu, made the discourse in a statement on Friday in Maiduguri.

Chukwu disclosed that the suspect on May 25 hit his sister with a pestle at Magumeri town in Magumeri Local Government Area of the state.

He said that Abba was aggrieved with the demand by his sister requesting him to sew a dress for their father.

He stated that “On 25th May, 2018, at about 9.40 a.m., one Abba Umaru hit and killed his sister, Ya’Amsa Umaru with a pestle in Magumeri town, Magumeri Local Government Area of Borno.

“The suspect is said to have been aggrieved because the sister asked him to sew piece of cloth she bought for their father.

“Consequently, he killed his sister, who was at the time, eight months pregnant, and buried her in a shallow grave in a room.”

Chukwu stated that the suspect would be arraigned as soon as investigations were completed.