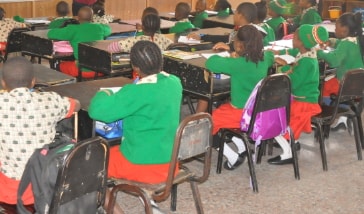 Muhammad Suleiman, a 26-year-old teacher, who allegedly defiled a three-year-old girl, on Thursday appeared before a Kano Chief Magistrates’ Court.

Suleiman, who lives at Rimin Gata Quarters, Kano, is facing a count charge, but he pleaded not guilty.

The prosecutor, Insp. Pogu Lale, said that the teacher lured the toddler into an isolated classroom at noon on April 13 and had sexual intercourse with her.

According to Lale, the school is situated within the quarters.

The prosecutor told the court that the child’s father reported the case at the Rijiyar Zaki Police Division, Kano, on April 14.

“The accused had sexual intercourse with her, which caused her harm,” he said, noting that the offence contravened Section 283 of the Penal Code.

Chief Magistrate Muhammad Jibril ordered the remand of the accused in prison custody.

Jibril adjourned the case until May 24 for mention. [NAN]

Continue Reading
You may also like...
Related Topics:kano, Muhammad Suleiman