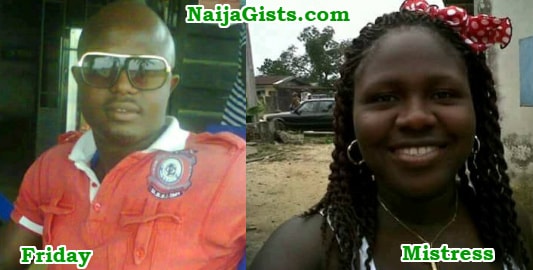 Before now, he was said to have been married for years to one Mrs Aderonke who endured a lot with him when he had nothing, they both had a beautiful and smooth running marriage until trouble crept in.

The husband and wife were said to have been living at his father’s house before they had their first child called Gift. After the birth of the child (Gift), God opened doors of favour for him and he got a good job at Eternet and they moved to a rented apartment, before he then built his own house and they moved in.

He then went all the way to Osun state Ilesa to be precise to pay his wife’s bride price and did their blessed marriage at Mountain of Fire at Ogbogbo, he bought a good car and built two more additional houses. And God blessed him with two more beautiful kids ( Okiemute and Emmanuel ) Suddenly he started seeing ladies outside his matrimonial home and started treating his God given wife like trash.

Unfortunately he fell for this modern Delilah, one Misan Edemi. All of a sudden he went to do introduction for her, because according to her she said she was pregnant for him, and she refused aborting the pregnancy.

Introduction was quickly done as she alleged she can bear the shame of giving birth out of wedlock, her bride price was immediately paid, it was few months later, news now came that she was not pregnant, instead she was diagnosed of having fibroid which was operated on the second week of January at a clinic at Atufe Road.

This man then fell for lady, went ahead to do a second marriage, still because of her he drove his wife who was 8 months pregnant outside and she had miscarriage.

He got fired from his job for unknown reasons. Right now he has plans of selling his houses after selling lands all in the name of Misan. He even lied that his wife had left the marriage for the past two years. When the wife heard of it, she went straight to the girl’s mother to report the issue and the girl’s mother told her that she had warned her daughter to leave married men alone but all fell on deaf ears..

My Boyfriend Slaps Me At Will Yet I Love Him! He Is So Manly – Confused Lady Confesses
Wife Divorces Husband For Refusing To Show Concern About Her Childlessness