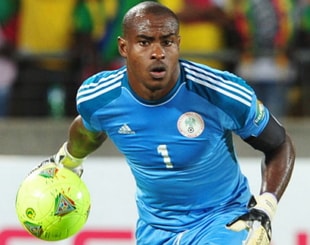 Nigerian footballer Vincent Enyeama and his Lille teammates on Saturday fled to safety, following an attack from their own fans.

Supporters broke through the barriers after a 1-1 draw with Montpellier and attacked their own players.

Security and stewards were unable to stop fans invading the pitch and had to move quickly to protect the Lille and Montpellier players.

The players were forced to flee from the Stade Pierre-Mauroy pitch as fans surrounded their own players and attempted to confront them.

Lille is in danger of being relegated from the first division and sit second from bottom after the latest result.

A dismal season had bred anger among the fans, who had directed their rage at club president, Gerard Lopez and the under-performing players.

Tension erupted into chaos on Saturday, in what Lille striker, Yassine Benzia described as a terrible experience.

‘We understand the reaction, but we can’t accept that players have been attacked,’ Benzia said.