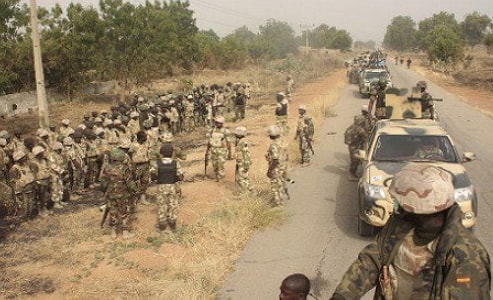 Five gallant soldiers died yesterday in an ambush laid by the insurgents in Borno state.

According to Army spokesperson, Texas Chukwu, several Boko Haram fighters were neutralised during the ambush attack.

”Troops of 271 Tasks Force Battalion deployed in Operation Lafiya Dole today Thursday 31 May 2018, while on clearance operation along Pridang – Bitta in Gwoza Local Government Area of Borno State, fought through an ambush staged by elements of Boko Haram Terrorists.

“During the fight troops ran into Improvised Explosive Device (IED) buried along Pridang – Bitta road by Boko Haram Terrorists before encountering the ambush.

” In the fire fight that ensued, the gallant troops fought through the ambush, they neutralized several Boko Haram Terrorists, while others fled with gunshot wounds.

“The remains of the deceased personnel have been promptly evacuated to 7 Division Medical Services and Hospital.”

Continue Reading
You may also like...
Related Topics:attack, boko haram