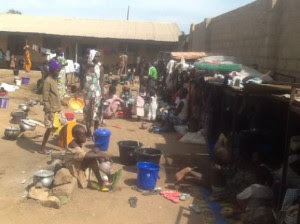 An unspecified amount of people died today at a camp set up for internally displaced people in Adamawa following a suicide bombing attack carried out by some suspected Boko Haram militants.

This blast is the first attack on an IDP camp in the North. Some IEDs planted overnight went off earlier today at a school in Malkohi.

According to Manzo Ezekiel, the spokesman for NEMA, several people died in the attack.