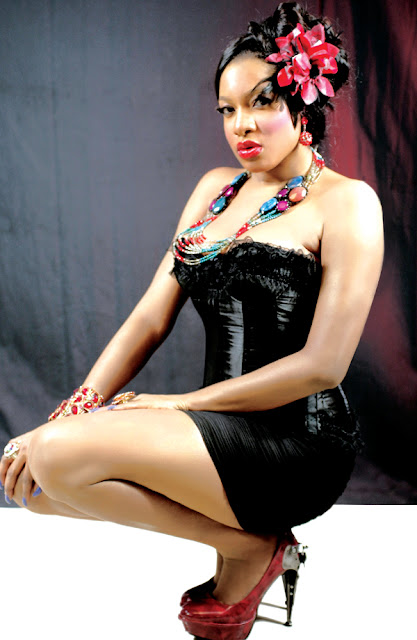 She is talented, versatile and hardworking. A woman of many parts, Chika Ike is an actress, model and also an entrepreneur. She began acting at the age of five featuring in stage plays in her local church. In fact, Chika only went professional in 2005 when she landed a role in Sweet Love, a flick produced by Grand Touch Movies.

By the time Chika played her first lead role in Bless the Child, a movie directed by T. Chidi Chikere, she has become a force to reckon with in Nollywood, thus going ahead in 2006 to win nomination as the Best Upcoming Actress at Africa Movie Academy Awards (AMAA), and getting a recognition award that same year.

Standing at 5ft 10 inches and blessed with sexy brown eyes, pretty Chika indeed became a household name after playing a lead role in an epic, Mirror of Beauty, which was premiered in the United Kingdom in 2008. Today, the delectable actress has starred in over 100 movies.

In an encounter with The Entertainer, Chika, nicknamed Fancy Nancy by her nanny, opened up on her career and other issues. Excerpts:

How was your growing up? Can we describe you as a silver spoon kid?

No, I wasn’t born with a silver spoon, that’s why I try to work hard. I grew up in a close-knit family of eight in Lagos. I was raised by my parents, who did not fail to imbibe discipline, hard work, and tolerance in me. I was actually born on November 8, 1985. I attended Premier Day Nursery and Primary School, Papa Ajao, Mushin, Lagos. I later attended Ronik International, Ejigbo, Lagos and then St. Francis Catholic Secondary School, Idimu, Lagos. I studied Human Kinetics and Health Education in University of Lagos and graduated in 2010. I am yet to go for my NYSC but I must do that very soon.

When and how did you come into the movies?

It all started in 2005 when I went for the audition of a film, Sweet Love, produced by Grand Touch Movies. I got a minor role but played it well. Since then, I have not looked back. I have acted in over 100 movies including Minute of Silence, Bless A Child, Implications, Mirror of Beauty, and Girls’ Cot 2 where I played the lesbian daughter of a Vice President.

You came into Nollywood in 2005 and graduated from UNILAG in 2010, have you been acting while in secondary school?

I modeled for three years after leaving the secondary school. Modeling was fun and full of excitement. It actually helped me in my acting career. As a model, you have to be confident. So, I acquired confidence as a model and it helped me greatly as an actress.

Models tend to experience sexual harassment either from their agents or patrons; did you at any time experience such a thing?

No, I did not experience sexual harassment as a model. Modeling as a profession was new when I started. Then, there were few models because parents did not allow their children to model. It was less competitive and therefore there was no need to succumb to any sexual advances before you got a job. You cannot compare then to nowadays when every girl in town wants to be a model. Even as an actress, I have never experienced sexual harassment. Though, sexual harassment is not peculiar to the movie industry, it is everywhere. Wherever you have males and females, there is bound to be sexual advances but speaking personally, I didn’t have to go through such thing.

You have featured in many movies, which one would you consider as your favourite?

It is difficult to pick a favourite among all my works. In fact, I am passionate about all my movies because they come with different challenges. For instance, I played the role of a kleptomaniac in a film. I stole something from an old woman who issued a curse on me. Nemesis later caught up with me and I got my leg amputated, which made me to walk with crutches. The role was really challenging physically. But then, in over 100 movies that I have done, I cannot pick a favourite.

What are your challenges as an actress?

Being a busy actress and not having time for yourself actually comes with fame and fortune. So, being famous and rich must have compensated for it all?

Honestly, fame has been wonderful to me. I have experienced the good and bad sides of fame but the good side has overshadowed the bad side. Apart from this, I am blessed with wonderful fans that love me.

Your marriage crashed, what actually happened?

I don’t want to talk about why my marriage crashed. It’s my private affair.

Do you have any regret?

I take every regret in my life as a learning process. I don’t dwell on regrets. I pick up lessons from them and then move on with my life. The lessons that life has taught me are many. I have learned to be hardworking, to be patient, never to give up, and not to be quick in judging anyone.

You just floated Chika Ike Foundation, what about it?

I have a charity foundation called Chika Ike Foundation, which I launched on May 27, 2012. I intend to use the foundation as a tool to give back to the society, most especially, to help children on the streets. Our aim is to provide these children with food, clothes, education, shelter, and make sure they have purpose for their lives. Recently, we threw a party for over 3000 kids at Egbe, Lagos. And we are still going to do more before the year runs out.

You seem to have a philanthropic heart, where did you pick this up?

I was born in a Christian home. My mother is a full time evangelist while dad is a businessman. Of course, I am a born again Christian. I have a good relationship with God and I believe everybody should have a personal relationship with God. I also believe that if God has blessed you, you should be kind and generous to others especially the less privileged.

I opened my boutique, Fancy Nancy Collections in Abuja on September 21, 2011. I have always loved fashion. As a child, I was nicknamed Fancy Nancy by my nanny because of my fanciful and funny character. One day, I was caught in my mother’s room with heavy makeup on my face. I was wearing my mum’s high-heeled shoes and also mimicking her in front of the mirror. So, when it was time to open my boutique, I had no choice than to call it Fancy Nancy. Fancy Nancy is essentially a store for ladies. We deal in fashion accessories for women only. Already, my fans are calling on me to bring Fancy Nancy to Enugu. Also, in the nearest future I have plans to open a branch in Lagos.

What do you want in a man? I mean what kind of man are you comfortable with?

My kind of man must be God fearing and must have a special relationship with God like I do. That quality takes a front row. He must be very hardworking, honest and possess a heart for philanthropy. My man must also be caring, loving and very romantic.

A lady who desires a romantic man must herself be romantic. Are you romantic?

For me to desire a romantic man means I am also romantic. Look, I am a sucker for romance. I am caring, loving and romantic. I believe there are so many men out there who have such qualities.

What advice do you have for youths who aspire to be like you?

They should stay strong and believe in themselves. They should not take ‘no’ for an answer. The youths should be hardworking, make sure they do the right thing, and above all, put God first in whatever they do.