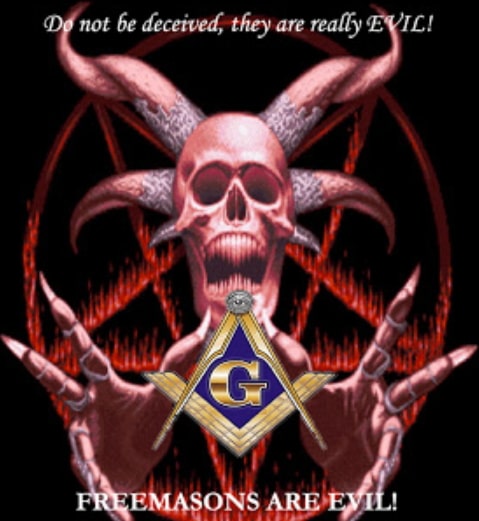 Freemasonry Is Deceptive And Evil. It Will Take  You Down The Path Of Darkness And Into The Lap Of The Underworld!.

The Problem in our society are the Freemasons, aka masons. If they were to disappear, the world would be a farrrr…..better place!

Masonry, the sure path to ruin. You may not see it now in the beginning, but you will as you progress in the craft and further yourself away from God and your Christian faith…

For starters, masons are interested ONLY in accepting those that hold some position of importance or authority in society. If it is a would be or actual politician than even better! Masons do NOT accept regular joes, homeless, or unimportant lazy folk. Second, the hook is the so-called Believe in a Higher Being nonsense (be it Jew, Christian, Buddhist, Muslim etc.). Third, as the mason progresses through the stages in the craft, the end goal for him is to realize that He does not need God because the transformation has occurred whereby the member realizes he is a God unto himself.

Moreover, the ceremonies he participates in are Occult period and anti-Catholic (Christian), Muslim, Jewish, and Buddhist. They are demonic period.

Fourth, it is the duty of every mason not to knowingly or wittingly do harm, talk bad about or tell on his fellow mason. And, when a fellow mason is in need or danger to help him above all else. T

herefore, this is the WHY it is so simple for the pedophiles within the occult mason organization to easily rape, molest, enter children with impunity. Some use mikey Finn, or simply get vulnerable children in exchange for cash to their families who need it.

No fellow mason can, or is allowed by their own acceptance of the rules when entering the craft, to “tell” on one another. Hence, the perfect crime.

Fifth, just to clarify, the end game of masonry, which also is the de facto mission of the occult, is to slowly like hair loss, have it’s members deconstruct all that is descent and Holy in society.

Masonry and Catholicism are non-congruent. This is why every mason has a duty to oppress society (one of the masonic central tenets is: Through Chaos Comes Order, and it is the masons that will establish their occult order unto society).

This is the reason why they work hard to destroy all that is sanctity in society and impose demonic teachings (For example: no Lord’s prayer, gays and lesbians and 1/2 and 1/2 are a good thing,not a mental disorder which it is and if you oppose this you are racist of some sort. Have an abortion because it is not a human you have inside you but a piece of pepperoni, flood countries with Muslims who NEVER integrate and are shut-in and by nature only impose on all their religious ways of thinking at all costs etc.).

And lastly, If one is a Catholic,  one cannot become a Freemason. DO NOT be fooled by the masons and their lies. It is a mortal sin and excommunication to follow.

If it were up to me I would banish masonry, jail the pedophiles and bring forth to the Hague International Court all masons to pay for their Crimes Against Humanity.

Hopefully, some day, this will happen.

Continue Reading
You may also like...
Related Topics:deceptive, evil, freemasons