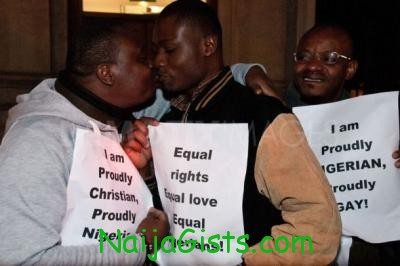 According to the daily times, some members of the gay community in New York, on Monday, protested against the recently passed bill that prohibited same-sex marriage in Nigeria.

The placard-carrying protesters, numbering some 15, made up of blacks and whites, claimed to be Nigerians as they arrived at the vicinity of the Nigeria House. naijagists.com

Ifeanyi Orazulike, the spokesperson for the group, said they had sent a protest letter to President Goodluck Jonathan on the issue.

He said that if the anti-gay bill was approved, Nigeria would place itself outside the comity of democratic nations.

Orazulike explained that the implications of the bill with its modification, would affect the long years of work in the protection and promotion of human rights.

He claimed to be the Director, International Center for Advocacy on Right to Health (ICARH).

Reacting, Consul-General of Nigeria, Habib Habu, said that he learnt the group came around and left after a while without demanding to present their grievances to anyone. “I learnt it’s like people making a brief stop-over for a while,” he said. “If they had requested for me, I would have received them.”