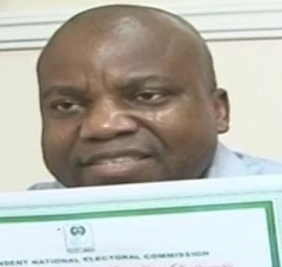 The lawmaker representing Ovia South West constituency in the Edo State House of Assembly, Hon Godwin Adenomo, has been suspended for demanding payment of N220m as outstanding benefits and salaries.

Adenomo was suspended during wednesday plenary for the first three months in the first instance for failing to appear before the House ad hoc committee to prove his claims.

He was accused of not following the proper channel in line with the house rules to make his demands which was described as political and a deliberate attempt to malign and bring the house to disrepute.

The Assembly said the Adenomo’s claims were frivolous, inaccurate and unfounded.

Chairman of the ad hoc committee, Hon Ojo Asein, said salaries and emoluments of members are determined by the Revenue Allocation, Mobilisation and Fiscal Commission ( RAMFAC)

Adenomo had in a petition he sent to Speaker Kabiru Adjoto through his lawyer, Mr Kingsley Obamogie demanded payment of N45m as his benefits since he was sworn-in in December last year.

He also said the Supreme Court which delivered judgement in his favour by sacking Hon Sunday Aghedo had asked him to be paid all his entitlement from June 2015.

The embattled lawmaker said all his salaries and emoluments amounted to N175m from 2015.

Adenomo vowed to seek redress in the court of law.

He said he was told to go and beg several leaders of the All Progressive Congress before the money would be paid to him.

His words, “I do not have regret because what I asked for was my benefit. They were looking an excuse to what they did right from day one. The problem is not about me.

“I am the only that has dared the godfathers and defeated them. Adjoto was paid all his benefit when he got to the house during the time of Zakawanu as Speaker. In my case, the reverse was the case.

“That action they took is ilegal. There is a judgment that says lawmaker cannot suspend lawmaker. I was voted to represent a people. I was sworn in on the 18 of December and since then my benefits were withheld. I was not placed in any committee. How do I perform my primary constitutional duties without being in any committee.

“They said I should go and beg so many people. I did that not knowing that these people are wicked.”