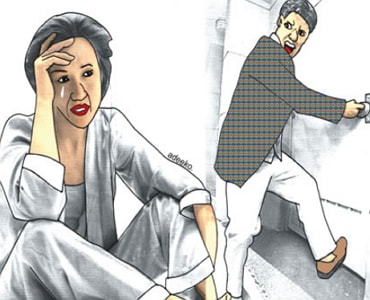 “I Have Never Enjoyed My Marriage, No Rest Of Mind & Peace As My Husband Is Short Tempered”- Woman Tells Court

Mr Halimat Yaya, has pleaded with an Agege Customary Court to dissolve her 23-year-old marriage with her husband, Ahmed Yaya, for being foul-tempered.

The 42-year-old business woman and mother of four, an indigene of Kogi, whose marriage was contracted in 1995, said there was no more love between them as
the man has turned her into a punching bag.

“l have never enjoyed my marriage,no rest of mind and peace as my husband is temperamental and finds fault in everything l do.

“My husband beats me whenever he feels like. He does not take care of me even when I fall sick, l am tired of the marriage,” she told the
court.

The petitioner alleged that since they have been living together they did not understand each other.

Halimat described her husband as an aggressive person and that life with him has become unbearable, urging the court to dissolve
the marriage.

“l want the court to separate us as I have moved out of his house since June 2017.”

The respondent, Ahmed, 48, however, denied all allegations leveled against him by his wife but said he was ready for dissolution.

“I still love and care for my wife,”.

“I practically made my wife what she is today, maybe she has met someone she thinks is better and wealthier than I am that is why
she wants the marriage dissolved,” he added.

On the alleged beatings, he said:

“We live in a face-to-face apartment, my neighbours can testify to it that I do not beat her.

“My wife no longer finds me worthy of being her husband and I take no offence for that.”

The court’s President, Mrs Ibironke Elabor, urged the estranged couple to be law abiding and maintain peace pending the conclusion
of the case.

She adjourned the case until July 31 for judgment.

Muslim Man Sues Christian Girlfriend For Refusing To Convert Islam And Marry Him
Nigerian Men Personality Traits: What To Expect When Dating A Nigerian Man