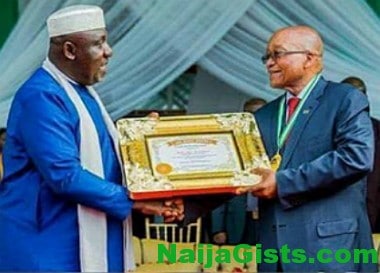 President Jacob Zuma of South Africa visited Nigeria, apparently invited by Imo State governor in southeastern Nigeria. Zuma visited Imo State where he beheld his sculpted statue, and welcomed by a scandalously petty assembly of political rascals. Yes that is what I call them, for that is what Imo politicians are under Okorocha!

I wonder why people are shocked at this bizarre happening. No one should be surprised because Okorocha found in Zuma that quintessential rascality that constituted their politics. Okorocha’s political imaginary cannot deviate from Zuma’s: both suffer from that strange illusion of being great in the eyes of their people.

That was why Okorocha compared himself to Martin Luther King Junior and Zuma compared himself to Mandela. Both are constantly deluded that the ‘sangoma’ effect (juju effect) of their politics is effectively yielding positive result. They thought that the people are bewitched by their daily chicanery. If not why would Zuma stand in front of that mockery sculpture that does not even resemble him to pretend that he is as great as Madiba?

Both Okorocha and Zuma regale in the brutal instrumentality of power: they indulge in monumental excesses through which they fritter away their people’s commonwealth. Imagine the monumentally sized cakes Okorocha cut to celebrate his birthday! The real costs of the cakes may construct 20 kilometre road in Imo State. What of Zuma’s numerous corruption and rape charges? Okorocha found in Zuma a brother Moradona playing the dirty game of politics with great dexterity. 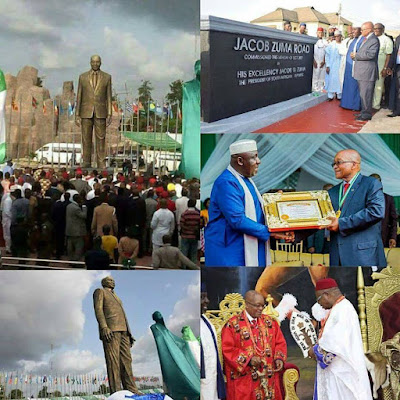 Nigeria as a nation could not celebrate Madela in this deserving fashion, only for a rascal governor to deceive himself with Zuma. If I were Zuma I would not come to Imo so that my nuisance value would not expand beyond South Africa to engulf the most populated nation in Africa, Nigeria. Chukwu aju! Zuma go back to South Africa and face Julius Malema and co. Go back and clean the table you desecrated.

In conclusion, this Okorocha effect is a monumental tragedy and can summarily be described as the rascality of leadership in Imo State.