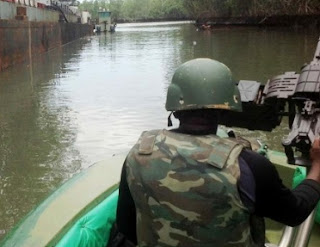 Some militants have allegedly beheaded a soldier attached to the Joint Task Force (JTF).

They also killed three civilians in Etim Ekpo Local Government of Akwa Ibom State during a shootout on Sunday.

We was gathered that security operatives launched a raid on militants’ hideout at Obon Ebot village in Etim Ekpo Council.

He was alleged to have masterminded the Ikot Ekpene Prison jailbreak last month in which 40 inmates escaped.

“The suspected militants ambushed the soldier and killed him. They chopped off his head and dumped his body at Urua Obo Inyang market, Akpan Udotim, a resident of Ikot Unna village, said.

He said three civilians, including a woman, were killed by suspected cultists at Udianga Enem, Ikot Obioma and Uruk Ata 11 in Etim Ekpo Local Government.

The Commander of JTF team in-charge of Etim Ekpo, Ukanafun, Oruk Anam, Ika and Ikot Abasi local governments, Major Mohammed Husseini, confirmed the incident, but denied that the deceased was a soldier.

He said: “The deceased was just our informant. We gave him military camouflage so that he could lead us to the camp.

“The informants were three. We gave them military camouflage to lead us to the camp to arrest some of the suspects, who escaped from Ikot Ekpene Prison. When the deceased heard gunshots, he attempted to escape because he was afraid. He was hit by stray bullets.”

The teacher, from Ikot Obioma village, was abducted by the ‘Red boys’ on his farm, after returning from his base in Ukanafun.

It was gathered that the kidnappers demanded N1 million ransom.

A source said: “Such a huge amount won’t be easy for the victim’s family to raise. The man and the wife are primary school teachers.

“Because of the crises in the community, the man evacuated his family to Ukanafun, but only returned temporarily to farm. He was unlucky to be abducted on his farm by hoodlums.”