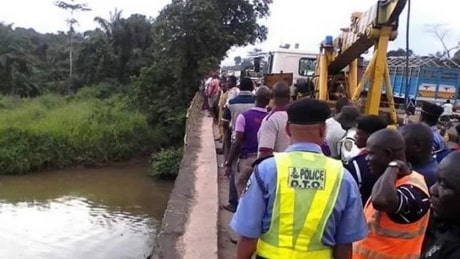 The Ogun Command of Federal Road Safety Corps (FRSC) has recovered the corpse of a driver who plunged into Ososa River on Sagamu-Benin Expressway on Saturday.

Mr Clement Oladele, the Ogun Sector Commander of FRSC, told News Agency of Nigeria (NAN) in Ota, Ogun, on Tuesday that the corpse was recovered at 9.25 a.m. on Monday.

Oladele said the corps engaged divers to effect the recovery.

The victim was a non-academic staff member of Tai Solarin College of Education, Ijegun,Ogun, who drove a black Honda Civic car.

“The driver of the Honda Car lost control due to speeding and flipped into the Ososa River on Sagamu- Benin Expressway, on Saturday,’’ Oladele said.

The commander explained that divers employed by FRSC searched for the body of the victim but only saw the vehicle on Sunday.

Oladele said that the deceased was buried after the family members picked up the corpse on Monday.

He said that the incident was really unfortunately but cautioned motorists to always be careful and desist from speeding to prevent unnecessary death.

The FRSC commander condoled with members of the family of the deceased and prayed God to grant them the fortitude to bear the loss.