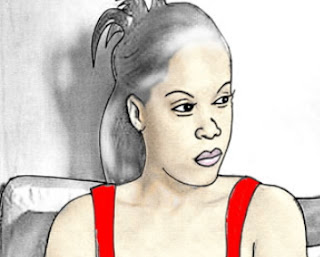 A woman, Mrs. Esther Abgundu, a native of Gwer Local Government Area of Benue State is now in trouble for inserting hot metal in her five-year-old niece’s vagina and burning her private parts, allegedly for eating out of her daughter’s food.

Mrs. Abgundu, according to a petition by the Justice Development and Peace Commission (JDPI) in the Catholic Diocese of Ekiti, had earlier peppered the girl’s private parts after allegedly beating her up in an incident that has drawn emotions.

The five-year-old girl, Aondoaver Sewuesi, the JDPI added in the petition to the National Human Rights Commission (NHRC) signed by its Director, Reverend Father Emmanuel Akingbade, “is a niece to Mrs Abgundu and they reside together at Ijelu-Ekiti in Oye Local Government Area of Ekiti State.”

JDPI said the incident occurred on November 26th, 2017, saying “the victim was babysitting the baby of the respondent (Mrs Abgundu) and in the course of feeding the baby, the victim took a spoon of the baby’s food and ate.”

JDPI said when it received the report of the incident, its officials visited the community as well as the traditional ruler, Oba Isaac Adetoyinbo Ajayi, saying “the Elejelu of Ijelu-Ekiti confirmed the report and further informed us that he has notified the Divisional Police officer of Ilupeju-Ekiti of the incident and the latter sent officers to arrest the respondent a day after the incidence was reported at the palace.”

Fr Akingbade added that the monarch “confirmed also that the victim was at the night of the incident rushed to the Ijelu-Ekiti health centre for medical care.”

According to the JDPI director, “we took further step of visiting the health centre for verification and questioning”, and further explained that the officials of the centre as well as the relatives of the victim all confirmed the incident.

The JDPI lamented that the five-year-old had been a victim of “frequent inhuman and degrading treatments,” saying “we took a closer look at the victim to confirm the incidence of maltreatment, child abuse and molestation.”

JDPI also alleged that Mrs Abgundu “was released barely few hours after her arrest and boastfully roams the streets of Ijelu-Ekiti freely and in peace as if nothing happend while the victim is neither able to walk nor sit well and still groans in much pains and discomfort.”

The JDPI described the alleged actions of Mrs Abgundu against little Aondoaver as a “case of inhuman treatment, gross disregard to human life and flagrant abuse if her human rights as enshrined in Chapter 4 of the Constitution of the Federal Republic of Nigeria 199, as amended.”

It called on the NHRC to intervene in the “matter of cruelty against the victim by ensuring that the respondent is brought to book to serve as deterrent to whoever still engages in acts of inhuman and degrading treatment of others, especially children.”