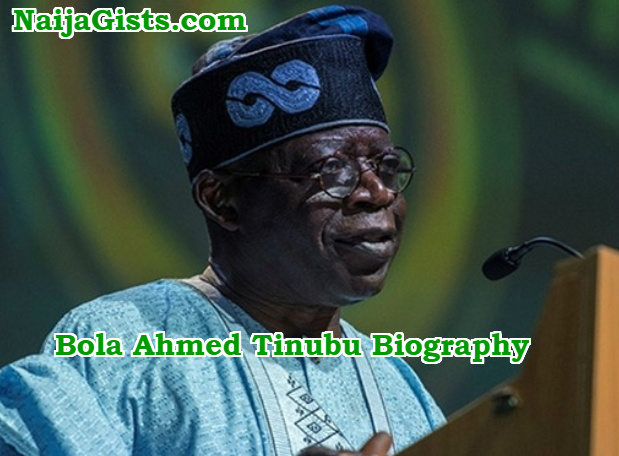 When talking about political icons in Nigeria certain names will always stand out, one of such names is Bola Ahmed Tinubu. He is said to hold great power in the All Progressives Congress (APC) party. He is not just a political lord but someone who has largely impacted Nigeria. Bola Tinubu is very well respected and held in high esteem in political circles and in our society. When making a list of successful politicians in Nigerian, Bola Tinubu is definitely one of those who top the chart.

Bola Tinubu’s full names are Bolanle Ahmed Adekunle Tinubu and he is of the Yoruba tribe of the Nigerian peoples. He is a Muslim by religion. He was born in Lagos a city in the South western region of Nigeria, on the 29th of March 1952. He began his primary school education at St John’s primary in Aroloya in 1958  one of the oldest primary schools in Lagos established in 1852. He then went on to attend his secondary school at Children’s Home school in Ibadan in 1965 at the age of thirteen; he was enrolled by his mother Alhaja Abibat Mogaji.  Bola Tinubu left for the United States in 1975 and had bagged a bachelor’s degree in Accounting from Chicago State University by 1979. Bola Tinubu was in the employ of some American company for a while before finally returning to Nigeria to take up a job with Mobil oil. He is currently conferred with two chieftaincy titles the Asiwaju of Lagos and the Jagaban of a kingdom in Niger.

Bola Tinubu started his political journey in 1992 by joining a party called the Social Democratic party. He was meant to represent the Lagos West constituency in the senate when he was elected senator of the federal republic of Nigeria. However, following the events of 12th June 1993, this appointment was cut short. Bola Tinubu became one of the brains behind the establishment of a movement to reestablish democratic rule in Nigeria.

With the restoration of civilian rule in 1998, Bola Tinubu returned to the country as he had previously exited the shores of Nigeria. Under the political party Alliance for Democracy (AD) he won the primaries and subsequently the governorship election making him the official governor of Lagos state in the year 1999. He held this position for eight (8) years during which he recorded tremendous works he was succeeded by Babatunde Fashola in 2007. That same year, he was charged by the Economic and Financial Crime Commission (EFCC) for a number of crimes and was freed of all charges two years later. He is married to Oluremi Tinubu, a senator of the federal republic of Nigeria. This marriage produced four children, one of which is now late: Jide Tinubu (late), Folashade Tinubu Ojo, Oluwaseyi Tinubu and Abibat Tinubu.

Without a doubt Bola Tinubu can be termed as one of the richest politicians in not just the city of Lagos but also Nigeria. He is rumored to have lots of property of enormous value all around Lagos. Some of these assert he has laid claim to while his ownership of others may or may not be true as he is yet to lay claim to them.

His net worth is guessed to be around Ten Trillion Naira. His asserts are as follows:

Oluremi Tinubu is the wife of Nigerian politician Bola Ahmed Tinubu. She presently belongs to the All Progressives Congress (APC) party and is also a senator. She was born on the 21st of September 1960. She attended Adeyemi College of Education and University of Ife where she graduated with a Certificate of Education in Botany and Zoology and a B.S in education respectively. With Bola Tinubu’s election as governor of Lagos state in 1999, she became the first lady of Lagos state and in May 2011 she became a Lagos state senator of the Lagos central constituency.

Alhaja Abibatu Mogaji is the mother of Bola Ahmed Tinubu. She was born on October the 16th in the year 1916 in Lagos state.

In her life time she was quite a force to be reckoned with as she was an active participant in political affairs. She is said to have been a member of the Action Group (AG) a leading political party in its time. She had also previously belonged to another political party known as the Nigerian National Democratic Party (NNDP) which was established in 1923. A contributing factor to her membership of this party was believed to be Alemotu Pelewura who was a strong mentor of Alhaja Abibatu. She remained an active member of this party up until the 1950s before she was convinced to band with the Action Group (AG).

Alhaja Abibatu until her death was the President-General of the Association of the Nigerian Market Women and Men. She died on the 15th of June 2013 at ripe old age of ninety-six (96). She was a great leader and a remarkable woman who received various honors for her contribution to society.

It is said that if Lagos state were a country on its own, it would possess one of the biggest economies on the African continent. The state is also famous for its size as it is said to be bigger than some countries. There are about twenty local governments in Lagos state. This state is rich in history and has played major roles in the Nigerian history as Nigeria’s past cannot be told without repeatedly mentioning Lagos state. This state shares its borders with Ogun State, Benin Republic and the Atlantic Ocean. This state was first referred to as Eko and is still called that name till date.

It was the capital of Nigeria prior to 1976. It is without a doubt the most populated city in Nigeria. The most widely spoken language in Lagos after English language is Yoruba; although this state is populated by diverse people from the different regions of Nigeria. Nigerians relocate from other regions to this state as it is viewed as a land of great potential and opportunity. Lagos state has a rich economy as it has massive revenue generating outlets.

Officially this state was established in 1967, from inception it has been ruled by a governor. It was first governed by Brigadier Mobolaji Johnson from 1967 to 1975. In 1999 Bola Tinubu was elected governor of Lagos state. He also contributed to the progress of Lagos as a state some of his achievements are:

Politics and the likes seem to come naturally to the Tinubu family from the legacy left by Alhaja Abibatu Mogaji down to the impact being made by Bola Tinubu and his wife Oluremi Tinubu. This family is indeed quite a remarkable one which anyone would be proud to be a member of.

For biographies of notable Nigerians, visit our Bio column.

Funke Akindele Confirms Twins Delivery, Keeps Mum On Surrogate Mother
Joke Silva: No One Can Prepare You For Marriage