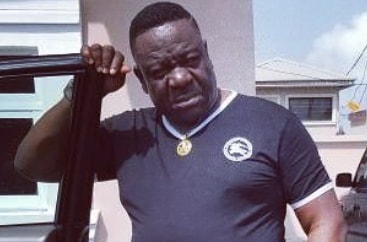 John Okafor popularly known as Mr Ibu is a household name when it comes to entertainment. He is a comedian and actor that has become popular over the years and known by many.

He has a God given talent for comedy and is many people’s favourite when it comes to comedy. He hails from Umunekwu Village, Eziokwe, Kanu West Local Government Area of Enugu state of Nigeria, born into a poor family on 17th October 1961.

The actor  was born into a family of eight with five boys and three girls and went to a primary school in his village and attended several secondary schools in Delta State before going to the Institute of Management Technology (IMT) to study Mass Communication.

As a young man, Okafor had to do many menial jobs to make ends meet and support himself through school. He was a butcher, a hairdresser and also sold firewood at different times in his life just to provide for his father’s house. Mr Ibu witnessed the Nigerian Civil War which took his father and other relatives, leaving him and his siblings to fend for themselves.

His life was so rough that at some point he considered committing suicide. He recounted his experience with one of his friends who he lived with throwing him out because he was travelling and would not let Ibu stay in the house alone. It was a friend who came back from Europe that took him in and supported him financially and in every aspect to give him direction.

He came into acting on 3rd December 1978 as continuity until few years down the line when he started acting in TV shows and movies. He got his name “Mr Ibu” when he starred in a movie with that title in 2004 which brought him to limelight and made him win best movie actor in the country during one of the Africa Movie Academy Awards.

He had a rough start but had to persevere to become the man he is today. He trekked long distances several times to attend movie auditions and rehearsals. He is known for his roles portraying stupid characters in movies which is largely responsible for his popularity. Because of this, he has won awards such as Best Comic Actor in Nigeria and Most Prominent Nigerian actor.

He signed a multimillion Naira deal with Merry bet, a betting firm in 2014 followed by another multimillion Naira deal with GOTV. It is worthy of note that Okafor was a boxer and wanted to make boxing a career until a Delta boy gave him the beating of his life which he said he will never forget. This made him to quit boxing after that fight as he said the boy disfigured him and he could not recognise himself for some time. He has won other awards including best Movie Actor of the Year award by the Ambassadors of Peace in Nigeria in 2014 Best Comedy Drama, at African Magic Viewer Choice Award event.

He was married to a woman from his locality but the marriage did not work out. According to the actor, he did everything he could to see that the marriage never ended but it was all to no avail. Because of the trauma of his failed marriage, Ibu stayed away from women for six years before meeting his present wife who is also an actor. His wife, Stella Marris who is also an actress hails from Imo State and was once the beauty queen of Imo State. He seems proud to marry his new wife whom he describes as his angel and the most beautiful woman on earth.

The actor said despite his effort to stay glued to his wife, women still chase him and he doesn’t need to woo them. Homosexuals haven’t left him alone either, as he spoke of an incident in which a homosexual man wooed him but he humiliated the man so much that he doubts if he will ever come close to him again. Regarding homosexuality, the actor said he hates it with passion and he uses his Facebook page to address all his fans that are involved in such activities, saying they will go to hell if they don’t stop it. He also stated that no woman can ever distract him from his loving wife with whom he has three children.

Mr Ibu has experienced some dark times in his life, one of which was the kidnap of his first son Emmanuel whose death and kidnap he blamed on his ex-wife. He also recounted his experience at University of Lagos Teaching Hospital which led to the death of his son. Ibu has also been kidnapped while in Enugu in 2008 and his house was once robbed. The robbers came on a Saturday morning to his home around 3am and robbed the house until 4:25am. The robbery seemed calculated as he wasn’t home when the robbers came. They stole cash of 14.3 million Naira and took many other things.

Although Okafor is not expressly known as a philanthropist, he has done a lot of noteworthy things to help other people. First of all, he has helped many current Nollywood stars to join the industry, one of which is Jim Iyke. He has also assisted many youths to go overseas and try to earn a living. His decision to be of help to many stems from his experience growing up as a poor young man and his struggles through life which he said he wouldn’t want to see anyone go through such things in life. He recounted his suicide attempt due to the suffering he was experiencing but the thought of his mother encouraged him to live on and make something of himself which he did.

Mr Ibu’s life should be an encouragement to many young people in Nigeria that are experiencing similar things and to keep believing that change and a better tomorrow is possible.

His estimated net worth in dollars is $4.2 million.