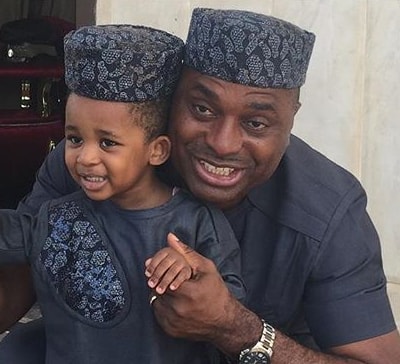 Apart from directing and producing movies, many may not know that Kenneth Okonkwo is also an entrepreneur, a practicing lawyer, a theologian and also politically inclined. He is also known to be a good father and husband who puts his family above everything else. Born on 6th November 1968, Okonkwo hails from the Igbo tribe in Enugu State, South Eastern region of Nigeria.

Okonkwo studied Business Administration at the famous University of Nigeria Nsukka and came out as the best graduating student when he was 21 years old.

He also read Diplomacy and International Law at the University of Lagos, Nigeria for his master degree before proceeding to Bible School to study Theology. Okonkwo has five degrees one of which is Law and he said he only went to Bible school to further his knowledge of God and not to become a pastor although he is known to preach wherever he went, which made many people to address him as evangelist.

Kenneth Okonkwo came into lime light in 1992 when he starred in “Living in Bondage’, a Nollywood movie in which he was the main character. The movie which mad waves and helped to draw the attention of Nigerians to the Nigerian movie industry played a significant role in laying a foundation for the present day Nollywood. According to Okonkwo, people did not patronize local entertainment prior to the release of Living in Bondage which sold very fast and was all over the country in a short time.

He has starred in more than 200 and has received many honours, one of which was best actor. He emerged winner of the African Movie Academy Award which held in Port Harcourt in June 2016. He was also given a recognition award by the organizing team of the City People Entertainment Award in 2015 for his immense contribution to the entertainment industry in Nigeria. Kenneth is estimated to have a net worth of over 2million US Dollars.

Kenneth got married to his first wife Ogechi Ezekiel, the only daughter to the General Overseer of Christian Pentecostal Mission International in the year 2000 following his decision to follow God in 1994. They had a son but sadly got divorced in the year 2002, an event that was a great shock to the entire Nigerian Movie industry and Kenneth’s fans. Many stories have been circulating concerning the divorce one of which blamed Kenneth for the divorce saying it was his temper that caused the marriage to break up. Responding to the accusation, Kenneth said he was a very calm guy but would not let someone take his life while he watches although he wouldn’t go into details.

Okonkwo was also accused of marrying Ogechi not for love but because of her wealthy background and her father’s status, a development that angered the actor greatly. In his defence, Okonkwo said he was from a wealthy family background and had five degrees which he could use to achieve whatever he wanted in life so such accusation was outrageous.

When questioned about the effect of the divorce on his preaching and profession of Christianity, Okonkwo said the divorce had nothing to do with his faith and preaching, stating that he was still a child of God and would preach whenever opportunity presents itself.  He later got married to his current wife Ifeoma Okonkwo who he met through his mother, in 2007 and had his first child with her in 2016.

As an actor, he spends most of his time on set so he was asked in an interview how he stays faithful to his wife and handle temptation from women. Okonkwo said he has never been unfaithful to his wife since their wedding in 2007. Concerning how he handles pressure from female folks, the actor said he tries to relate with them as sisters and if he needed to be with his wife, he always did in order to not give the devil an opportunity to ruin his life. He said he could fly from London to Nigeria just to be with his wife before going back just to avoid trouble. This show that Okonkwo is truly a good husband and father.

Kenneth Okonkwo’s movie ‘Living in Bondage’ was the first Nollywood movie, which makes him one of the pioneers of the industry. However, the actor says acting is just a hobby for him since he worked as a marketing executive before and is currently a practicing lawyer since his call to bar in 2009.

He owns his chambers known as Supreme God Chambers although he works with many other chambers in the country. Okonkwo said although he was deep into the law profession, he always has time for the movie industry if a role comes up. The famous actor who said he doesn’t accept a role if it is not challenging says he is like a consultant for the movie industry and had helped and watched many entertainers grow up which he said gave him recognition as a key player in Nollywood.

Okonkwo although a practicing lawyer, believes that most cases can be settled through negotiation and out of court, which is why he became a trained negotiator. He is also interested in laws protecting property, which he said is important to him because he hates property rights infringement. He grew up in a home that placed so much importance on education and he had freedom to do sports.

Although Okonkwo was very much interested in sports such as football and tennis, he was also dedicated to his studies. He said his father invested so much in them to make them successful and has really reaped the fruit of his labour as he has two other sisters who are practicing layers like him.

Kenneth Okonkwo recently declared his intention to run for the office of governor of Enugu State in the coming 2019 Elections and he stands a good chance of winning considering his popularity and fame.

His estimated net worth is $2 million.