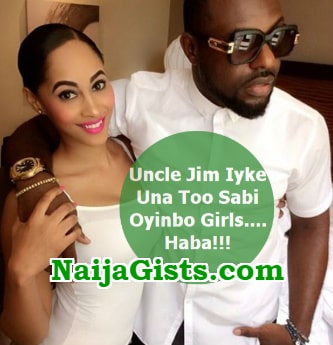 Jim Iyke, whose full name is James Ikechukwu Okolue Esomugha, is one of the most prominent figures in the Nigerian entertainment arena. He is a Nigerian star actor, who has starred in many top movies in Nollywood. Jim Iyke, today, is one of most revered actors in the Nigerian movie scene. He also made his debut in music, with an album titled Who Am I. The album featured many top musicians in Nigerian, including 2Face and Sound Sultan.

Jim Iyke was born on 25th September, 1976 in Libreville, the capital city of Gabon. He was born into a family of ten; his mother, his father and seven siblings (sisters). Mr. and Mrs Okolue, Jim Iyke parents, hail from Anambra state, in the south eastern part of Nigeria.

At age 11, in 1985, Jim Iyke was enrolled at Federal Government College, Abuja. He acquired his entire secondary education in this college and duly obtained his SSCE in 1991.

Shortly after Jim’s graduation from F.G.C Abuja, he was admitted to study Banking and Finance at the University of Jos, Plateau state, where he obtained his diploma. Jim later re-enrolled at UniJos and, eventually, obtained his Bachelors degree, in Philosophy.

Jim Iyke has been outstanding in the Nollywood movie industry. He is, however, majorly known for his enigmatic character, as well as his controversial lifestyle.

The star actor reportedly got married to his girlfriend and baby mama recently. The lady in question is a white lady, who is known by the name, Dana Kinderlyte. The couple had their wedding in Château Cocom,  Texas, USA. The wedding was a secret event which had only few family members and trusted friends in attendance.

Dana Kinderlyte is an European woman, who hails from Lithuania. She is 25 years old and a trained Lawyer.

In the past, Jim Iyke has been involved, romantically, with several Nigerian Nollywood actresses. Top on this list are Nadia Buhari, Rosy Meurer and Rita Dominic. The popular actor was also involved in a romantic relationship with a popular Jamaican model, Kenturah Hamilton. Unfortunately, their union ended in a messy breakup.

Jim Iyke and baby mama/wife, Dana Kinderlyte, have a son between them. The boy was born on 1st September, 2015 and was subsequently named Chidubem Harvis Iyke. The baby was delivered at the popular Grady Hospital in Atlanta, Georgia, USA. Harvis celebrated his 3rd birthday on 1st September, 2018.

The star actor, only a couple of years ago, moved into his multimillion naira mansion in Abuja, the capital of Nigeria. The mansion is rumoured to be worth over one hundred million naira.

Jim Iyke’s mansion in Abuja is fitted with an extensive garage, which houses the star actor’s intimidating automobile collection. Some of the most expensive cars in the garage include a Dodge Challenger, a Plymouth Prowler (convertible) and a Camero SS (convertible).

Jim Iyke has been able to keep his personal/family life beyond the reach of rumour mongers and naysayers. He has a wife and son. On a larger scale, Jim Iyke, like a typical Igbo man, has a large extended family. He has seven sisters, who have procreated to give him many nephews and nieces.

The most publicized relationship involving Jim Iyke is, without doubt, his romantic union with popular Ghanaian actress, Nadia Buari. These two were the power couple of the Nigerian entertainment arena some years back. Their relationship, reportedly, came to a halt when Nadia Buari gave birth to a set of twins, for another man.

Both Jim Iyke and Nadia Buari has since moved on.

Jim Iyke has left his footprint on the Nigerian movie platform. Today, he is one of the most sought-after and highest paid artistes in Nollywood. In a recent interview, Jim Iyke attributed his reduced movie appearances, in recent times, to producers’ affordability of his services. According to the star actor, movie directors in the Nollywood movie industry can no longer afford to pay him. Hence, he only features in top-rated/high earning movies.

The popular actor started his acting career 17 years ago. From 2001 to date, he has starred in over 150 movies in Nollywood. In 2007, which was barely six years after Jim Iyke made his Nollywood debut, he launched his own movie production line, Untamed Productions.

We have compiled some of the top rated movies Jim Iyke has featured in, from 2001 to date. Below is an outline of the compilation.

The famous actor has featured in a ton-load of movies in Nollywood, raking in hundreds of millions of Naira in the process. Jim Iyke also has numerous high-paying endorsement deals, as well as countless investments. The actor is worth an estimated $8 million (approximately 3 billion naira).