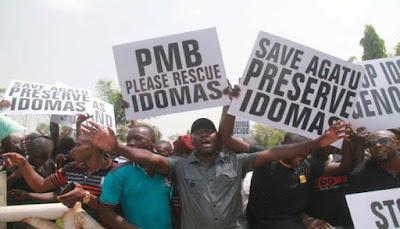 January 5, 2018 – An Appeal To TIV And Idoma Nation In Benue State: Stop Fulani Attackers, If Buhari Refuses To Stop Them

The best form of defence is to be offensive. The only way to attract the attention of the FG is to give a reprisal attack to whosoever attacks you. It is in the nature of our leaders to step in only when
things gets out of hand.

So my people, why not just let things out of hand by not putting your tails in between your legs but rising up to the occasion to defend yourselves? Nobody will dispute the fact that you were being massacred
right inside your territory.

It is on record that no fulani man has ever come out to condemn the wanton killings being perpetrated by Fulani herdsmen across the Nation. And mind you, this is not a hate speech but reality.

Mr. President Sir, your ascension to the office has negatively empowered your kinsmen to unleash terror attacks on innocent people whose lives and properties have been destroyed beyond measure. Whether
you agree with them or not you have never made it clear. But action speak louder than sound. You were very quick to console with foreign Nations who suffered terrorist attacks or misfortune but too slow or
reluctant to do same with your own.

Therefore we have decided that come 2019, you will be voted to the UN General Assembly and not in Nigeria. You seem to be an expert in foreign affairs but a novice to domestic affairs. You still making
promises and excuses instead of leading the Nation. You may not be corrupt but we are not safe with you, and you know the rules is safety first.

We are tied of watching you parading on the mantra of a saint while we go into extinction. Since you cannot stop the herdsmen, we have decided to stop you in your tract before more harms come upon us.

When people and properties were destroyed in Numan, you were busy commissioning projects and campaigning in Kano state without any remorse.

Why have you not condemn these atrocities for once? Or is it one of your projects that is being executed?

When you were sick, we stood by you and prayed fervently for God to heal you and during that time, the herdsmen laid low.
TO BE CONTINUED….