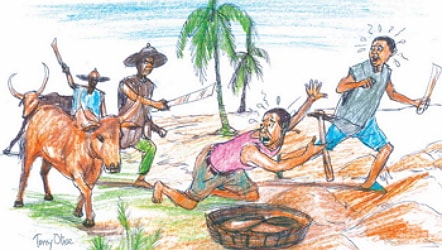 The killing of seven people in Gbeji town Ukum Local Government area in Benue state happened on Tuesday between 6pn and 7 pm, it was learnt.

The Principal Secretary General of the National Union of Road Transport Workers (NURTW) Comrade Bogal Àbuul, an indigene of the area, said the herdsmen stormed Gbeji town with sophisticated weapons, killed the people before setting the town ablaze thereby destroying properties worth millions of Naira .

He expressed concern that the invaders operated for more than 10 hours unchallenged despite the deployment of military personnel in the area .

Police spokesman Moses Yamu could not be reached to comment.

A 29-year-old man identified as Israel Okeh was killed by herdsmen along Ankoma-Doka road in Doma Local Government Area.

The victim, who hails from Gidan Rai, was said to be conveying two women on a motorcycle when the attackers ambushed and killed him.

At Udela village in Awe Local Government Area, the armed herdsmen reportedly opened fire on the locals at midnight killing one person on the spot. Many were injured.

A villager, Mr. Nambe Ornguga, who narrowly escaped death, told our correspondent that the marauders came at about 1am, shooting sporadically.

“I slept in the bush yesterday with my wife and four children. The herdsmen came shooting and warning people to leave their villages as there would be more killings if they insisted on returning home. They had told us that we would not know peace until Benue State suspended the anti-open grazing law”.

A resident of Kuduku in Keana Local Government Area, Mr. John Iwar said the herdsmen issued an ultimatum for them to vacate their villages.

President Tiv Youth Organisation in Nasarawa state, Comrade Peter Ahemba, appealed to the government for the provision of security personnel in the affected communities to stop the killings.

“We call on the federal government to direct the deployment of military forces in the state on a full-scale operation to flush out the armed herders who have forcibly taken over most of the Tiv villages in the state” As a result of the renewed killings, no fewer than 10,000 people who had left the Internally Displaced Persons (IDPs) returned.

Governor Samuel Ortom described the ongoing killings as an extension of the terrorism perpetrated by Boko Haram.

Speaking yesterday in Makurdi, Ortom said the manner in which the armed men invade communities is not different from the mindless acts of Boko Haram in the North East.

“They come with sophisticated weapons and kill people, ” he said

Ortom said the pattern of attacks by the armed militia is their trademark of occupying communities after killing and sacking the inhabitants.

“In some cases, they do not have the herds. They just come with their weapons, kill and chase the people out and take over the land, that is the worrisome part of it”, the governor stressed.

The governor said the trend of attacks on Benue is beyond mere grazing of livestock, arguing that if the invaders were only interested in grazing, the massive destruction of lives and property would not be their priority.

Continue Reading
You may also like...
Related Topics:attack, hersmen, nasarawa